Some statements speak for themselves.  Black, Brown, ATX is a short (but heavy) dose of reality about the shifting populations of Austin over the past decade or two, and the damage it causes in the foundations of some key Austin neighborhoods full of rich culture and history.  Much love to Kelene Blake for voicing things, and Da’Shade Moonbeam for visualizing it.

Right around the beginning of each year, NPR kicks its Tiny Desk Contest Concert Series into gear.  The rules are simple… record yourself performing a song, and you must include a desk of some sort in this performance.  This year, I plan to take part, but I also plan to showcase all of my musical friends and peers who are choosing to take part as well, in hopes that our scene can make some much needed noise.  The first cat out the gate for 2017 I have seen is the incomparable Da’Shade Moonbeam, sharing a piece of work he has labelled as Untitled at this time.  Don’t let that lack of title fool you, though… nothing that Da’Shade puts in the world lacks depth or substance, ever.

Dig it… Third Root and Adrian Quesada collaborate on what would already be a banger on its own.  Reinforcements are then called in, in the form of Da’Shade Moonbeam, Riders Against The Storm (RAS), Bavu Blakes and Vocab.  Bars upon bars, all spitting on the knowledge tip.  Soul Force is a monster of a song… not since the days of We’re All In The Same Gang or Self-Destruction has there been a collaborative effort this deep and meaningful.  Certainly worth the $0.99 price tag.  Here’s to hoping all parties involved can find the time to make a video out of this, because songs this strong deserve visual accompaniment.

Da’Shade Moonbeam has never been one to shy away from the important issues at the time they mean the most.  Power finds Da’Shade speaking about those that serve and protect us, how we must learn to trust without being victims, and how they must learn to do a job that may be against their nature.  The police are definitely here to protect us, but the ultimate responsibility for protection of you and yours lies on the individual.  Anytime Da’Shade speaks on topics that matter, I will most certainly listen.

So much social media out there in the world.. it’s a wonder one can keep all of their digital expressions straight these days.  In an effort to showcase some of my lesser-known expressive outlets, this post is an introduction to the DoomsdayNOW Tumblr page showcasing the digital art of Chief and TheDoomsdayDevice.

This visual journey stars (from left to right) : The Complimonster, Da’Shade Moonbeam, me, and MARS9T8D4.  I couldn’t pick a more creative group of guys to rewrite history with if I tried.

Here’s a dope audio-visual from the longtime homeboy Da’Shade Moonbeam for his introspective Girl Song.  The approach is similar for the video and the song.. never judge a book by it’s cover, because being pleasantly surprised is one of the best parts of male-female interaction.  I’m definitely looking forward to more material from Guerilla Reel.

This is powerful stuff… just listen… 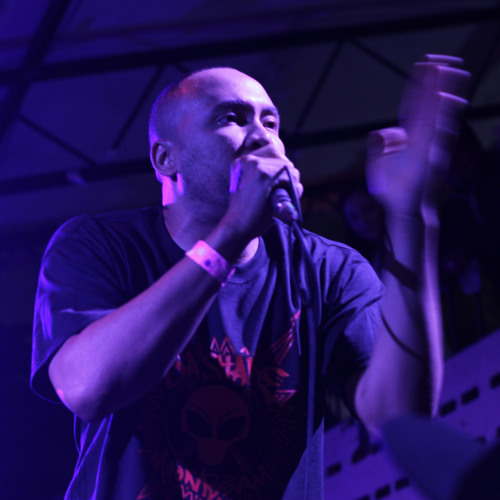 The Confessional :: “GOOD MAN (Before THE REVAMP)” Performed By Da’Shade Moonbeam

The work of Da’Shade Moonbeam needs no explanations.. it speaks volumes for itself.

Posted in Audio-Visuals, General Information, Spotlight, The Good, The Bad, The Ugly

Cinematic Sunday :: “No Gun In My Hand”

from the digital desk of Da’Shade Moonbeam:

“No Gun in my Hand was written a few years back after having a conversation with one of the kids I work with about new school gangsta rappers being 100% real and better than those I considered to be lyricist.  The young man had no clue I could rap.  I said “I bet I know a Nerd that could keep pace and even out run, write, and recite your favorite rapper.”  The kids asked, “who?!”  I said “Da’Shade Moonbeam, that’s who!”

They liked it and the bridge was created.”

Tagged chief, da'shade moonbeam, no gun in my hand, the doomsday device

Please, You Mad Cause He’s… :: “Stylin’ On Em” by Da’Shade Moonbeam

You know the drill… Da’Shade Moonbeam is the real deal.  A true original, he effortlessly blends different cultures and genres with ease, and in a package that most folks may not be ready to accept, but will be forced to in the near future.  He’s changing the game, and bringing back the days when it wasn’t about something surface level, like swag or style… he’s taking it to a place where you have to stand out on your own terms in order to be truly heard and appreciated.  Check out “Stylin’ On Em” for an example: